Bec O’Connell had forgotten the silence. How good it was. She closed her eyes and listened. Really listened. Nothing.

She took a deep breath. The crisp morning air tasted faintly of eucalyptus leaves, still damp with dew. It wouldn’t take long for the sun to burn that away, leaving behind the taste of red dust and dry earth. The taste of the Australian outback. The taste of home. In the distance, a kookaburra laughed to welcome the day. To welcome Bec back to Farwell Creek.

She walked out into the silent street, drinking in the familiar sights. At the far end of the tiny town was the one teacher school where she and her friends had learned so much, and somehow acquired an education at the same time. At the other end was the pub, with its long bar and slow moving fans. In between was the shop, half a dozen houses, the post office where Bec had grown up and the stock feed store that had been her second home. Nothing had changed.

Well – one thing had.

Bec felt tears prick the back of her eyes as she looked at the sign above the feed store. K. and B. Braxton, props. They had been more than simply her best friend’s parents. Kevin Braxton had filled the gap left by the father Bec had never known. The Braxtons had treated Bec like a second daughter. And now they were gone. After leaving college, Hailey had come home, but Bec had stayed in the city to work. She’d often thought about going home. But not like this. Not to help Hailey say goodbye to her parents.

At the store’s side door, she stood on her toes to reach the key that was kept above the doorframe. The whole town knew it was there, but not once had anyone misused it.

Bec stepped inside the huge shed. As children, she and Hailey had spent endless hours playing among the hay bales and bags of feed, under Kevin Braxton’s watchful eyes. Bec found the light switch.

Her voice echoed around the huge shed, but there was no answer. That was strange. Cat should be looking for his breakfast. Hailey still couldn’t face being in the store, so Bec had volunteered to feed Cat, a black and white stray they’d adopted years ago, and named after the stray in Breakfast at Tiffany’s.

In the store’s office, the empty cat food bowls were where they had always been.

Bec opened the small fridge. She found the open cat food can, and banged loudly on it with the spoon. That always worked.

Bec was starting to worry a little, when she heard the first human sound of the day. As the car door slammed, she wondered who else would about so early.

Cat walked in through the open door, his tail arched over his back, his green eyes blinking at her. He walked slowly past, rubbing his long lean body against the leg of her jeans and then sauntered to his food bowl.

That was another thing she had forgotten. How tall Nick Price was. He seemed to fill the doorway.

“Welcome home.” He didn’t move to hug her. Things between them had changed when she left for the big smoke.

“Cat was with you?” she asked.

“He must have jumped into the cab of the ute yesterday. I didn’t see him until I got home.” Nick lived and worked on his parent’s cattle stud a short distance outside the town. “I spent most of the night fighting with him for some bed space.”

Bec could guess who had won the fight. Nick was big and as tough as a stockman had to be, but he had a gentler side. No-one knew that better than she.

Cat had finished his breakfast. He sauntered nonchalantly up to Bec and sat looking up at her, expectantly. She bent over to scratch the top of his head.

“He missed you when you left,” Nick said. His voice was very soft.

They weren’t talking about Cat any more.

“I guess I missed him too,” Bec admitted.

The big moggie slowly stretched then walked to a pile of empty hessian chaff bags. He leaped onto the pile, slowly turned in a circle then settled himself comfortably. He looked up at Bec again, his green eyes shining in the dim light.

“So, how are things in the city?” Nick asked.

“When are you going back?

“Sunday. I have to get back to work.” She didn’t really. She hated her job. She didn’t like the city much either. But there wasn’t any choice.

Nick crossed to the pile of chaff bags. He stood stroking Cat, his back to Bec. “You could stay.”

“But what would I do? There aren’t any more jobs now than three years ago.”

“I think Hailey would like to keep this place.”

“Keep it?” Bec looked around her, and the piles of hay and cattle feed supplements, the farming tools and stockman’s gear. “There’s too much work. She’ll never be able to do it alone. She’ll need some…” Her voice trailed off.

“Yes. She will.” Nick turned to look at her.

From his nest on the chaff bags, Cat looked up at her too. He gave a short sharp meow.

Nick smiled. “See, even Cat thinks it a good idea.”

Nick nodded. “I think he does.”

Bec felt as if a weight had been lifted from her shoulders. Until this very moment, she hadn’t realised how very much she wanted to come home.

As they pulled the door shut behind them, the interior of the feed store grew dim again. All was silence, except for the sound of a cat purring. 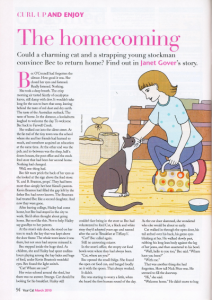 Artwork by Mary Kilvert, courtesy of Your Cat

This story serves as a prologue to ‘The Bachelor and Spinster Ball’. It was written after the novel was finished, at the request of the editor of Your Cat.