Sarah heard the girls giggling as she opened the office door. The students huddled at the end of the corridor had been in her office a few minutes ago to collect some papers for their Year 9 history class. Whatever was amusing them, she was certain it wasn’t history notes.

The girls were so intent on what they were doing, they didn’t hear her approach.

The girls started guiltily, and one crumpled the papers she held in her hand.

“Then you won’t mind if I have a look.” Sarah held out her hand.

Amazingly the teenager blushed as she handed over the papers. Something was definitely amiss. Sarah smoothed the pages and cast her eyes over the printing.

…silken hair flowed through his fingers like a river of gold. She didn’t move as he ran his fingertips down the long white column of her neck, feeling the powerful pulse beating there. Her brilliant green eyes flashed a challenge that he was powerless to deny…

Dragging her eyes away from the words, Sarah turned the pages. There were four pages of history notes plus an extra two pages that were most definitely not schoolwork. Wordlessly, she held out her hand to collect the other sets of notes. The girls handed them over with obvious reluctance. Sarah flicked through the pages. They were all the same.

“There’s obviously been a mistake,” she said calmly. “Kirsty, come with me and I’ll give you new copies. The rest of you should be in class by now. Go.”

Back in her office, Sarah dropped the papers on her desk and thought quickly. “I think the best thing to do will be to simply remove the last two pages,” she said to the girl hovering just inside the door.

Kirsty didn’t say anything while Sarah quickly accomplished the task. After one final check that this time all was as it should be, Sarah handed over the notes.

“Off you go Kirsty. Please tell your teacher you were delayed while I finished the notes, and apologise for me.”

“Yes Miss Tate.” The girl vanished, closing the office door behind her.

Safely alone in the privacy of her office, Sarah reached for the offending pages and started to read, feeling her face flush as the passionate encounter unfolded in front of her. She had been wrong in thinking that the pages had nothing to do with history. The clothing being dishevelled was definitely of a bygone era.

Sarah almost cried out with disappointment when she reached the bottom of the second page. She had to know how it ended! Did the lovers consummate their desire? Did they live happily ever after? Sarah sighed, and dropped the pages back onto her desk.

Sarah had a secret. She loved romance novels. The bookshelves in her small flat groaned under the weight of the lives and loves played out on the pages of her many books. From Jane Austen to Bridget Jones, Sarah had shared their pain and their joy. As a plain and shy teenager, she had retreated into books for her romance and discovered a love that proved far more lasting than any of the boys she had dated.

It was not something she had shared with anyone at the school. Not that she was ashamed, exactly. She just felt that the teachers who read and taught such literary works might look down at their office assistant who read romance.

She picked up the two pages from her desk. They were very good; easily as good as anything on her bookshelves. In just two pages, she had become so involved in the characters that she just had to find out what happened. But she didn’t know where those two pages had come from.

Perhaps she could find out.

Most of the paper that came into her office was from the teachers – notes and tests they needed her to copy for their classes. She kept them in folders on the bench next to the copy machine. The Year 9 history notes were in the third folder from the top. She opened it and carefully flicked through the pages. There they were, two pages of passionate romance attached to the notes on the Napoleonic war.

He was Sarah’s second secret.

Lee Barnett was new to the school. He had arrived at the beginning of term to replace a teacher who left. Sarah met him in his first day. He was about thirty and quite good looking. At least she thought he was good looking. Not flashy, like some film star. He had nice eyes, and when he smiled his whole face joined in, causing Sarah’s heart to flutter like a heroine in one of her books.

They had talked in the course of their work, but that was all. He was polite and friendly towards all the staff, but he didn’t seem to be particularly close to anyone. Sarah had sneaked a look at his staff file, and knew he wasn’t married. She had never heard any gossip about a girlfriend. Lee Barnett seemed almost as quiet and shy as Sarah.

Except… he apparently wrote historical romances. Sarah read the words again. Such beautiful words. Looking at Mr Barnett, she would never have suspected such passion. Oh how she wished…

Sarah bit back that thought and wondered what on earth she was going to do. Mr Barnett was in class at the moment. She wondered if he had even noticed the missing pages. If he hadn’t, he soon would. She should give them back to him. But then he would know that she’d read them. Know that she knew…

Her courage faltered at the very thought.

Sarah was still undecided when the bell rang for the lunch break. She headed for the staff lunch room, leaving the precious pages safely stowed in her bottom drawer.

Mr Barnett was also in the lunchroom, sitting in a corner, a book in one hand and a sandwich in the other. He looked up as Sarah entered, and for a moment their eyes met. Did she see something there, or was it simply wishful thinking? Slightly flustered, Sarah sat at a table with two other teachers, and hovered on the edge of their conversation about a new movie showing at the local cinema.

When the bell rang for the next class, Sarah left quickly to seek the refuge of her office.

She had barely settled, when a light tap sounded on the open door.

“May I come in?” His voice was deep and gentle.

He closed the door behind him, “As there are no students about, surely you can call me Lee.”

“Ok, Lee.” The silence seemed very loud. “You don’t have a class this period?”

“No. No, I don’t.” Lee seemed awfully big in her tiny office. He moved around a little, touching the shelves, resting his hand on the copy machine.

Sarah couldn’t help but replay the words he’d written. How she wished she had long fair hair that would flow like molten gold through a man’s fingers. Or a swelling bosom that would catch a man’s – this man’s – breath in his throat.

She could simply tell him she had the pages. But somehow the words just wouldn’t come. How do you tell a six foot tall man that you know of his secret life writing historical romances? And to admit she had read his passionate words would be beyond her.

“Thank-you for copying the Year 9 notes,” he said.

“You’re welcome… Lee.” His name sounded good on her lips.

“Do you still have the originals?”

“Of course.” She handed over the folder, wishing as she did that she had put the novel pages back inside.

Lee opened the folder and quickly glanced at the contents. Sarah thought she saw a flash of disappointment on his face. For an instant she considered saying nothing. He would just walk away and it would be over. But that wouldn’t be right.

She opened her drawer and held out the pages.

He barely glanced at the pages as he took them. “Yes, they are.” He slipped the pages into the folder with the history notes.

Was she imaging it, or did his face colour?

“I assumed you gave them to me by mistake.”

“I did. I am so glad you didn’t include them in the history notes you copied for my class.”

“It’s all right,” Sarah hastened to add. “I found them and got them back. But a couple of the girls did read them. Sorry.”

“No. Don’t be sorry.” Lee assured her. “It’s my fault, not yours. I just hope the girls didn’t realise I wrote them. That would be embarrassing.”

They both laughed, and for an awkward moment there was nothing more to say. Sarah broke the silence.

“Do they live happily ever after?”

She nodded at the folder. “Roderick and his fair Kayla.”

“Of course,” Lee said without hesitation. “I believe in happy ever after. Don’t you?”

His eyes were very blue and very expressive.

“Yes. I believe.” Sarah answered softly. “I read romances a lot,” she hurried on. “Yours is very good.”

“Have you written any others? Had them published?” She could buy one. Or maybe she already had read his books without realising who the author was.

“I’ve written one other. It will be published this summer,” he said, somehow managing to be both proud and bashful at the same time.

“Of course,” Lee said. He hesitated for a few seconds before continuing. “Would you like to read more of this book?”

“I would appreciate someone else’s opinion on the manuscript, before I send it off.” Lee said, smiling at her. “Especially someone who reads a lot of romances.”

“I’d be happy to.” Sarah felt a little breathless. Almost as if she herself was part of some romantic scene.

“Then I would like to buy you dinner. To say thank you.” Lee’s smile lit the room.

Just then, the bell sounded.

“I’ve got a class now,” Lee said. “Would Friday be all right? For dinner. I could give you some chapters to read.”

“Friday would be fine.”

With a smile and a nod he was gone.

Sarah sat behind her desk, her hand resting Lee’s folder, which he had forgotten. He should be more careful. She thought about opening it and reading Lee’s words again. She didn’t. She stowed it carefully in her bottom drawer, her thoughts turning to the opening chapter of her own romance.

I am a member of the Romantic Novelists Association – a group of supportive, intelligent, funny and wonderful women (and a few brave men). One, who is also a teacher, told me she had almost accidentally put pages from her new novel into her school work. Sometimes it doesn’t take much to set me thinking… 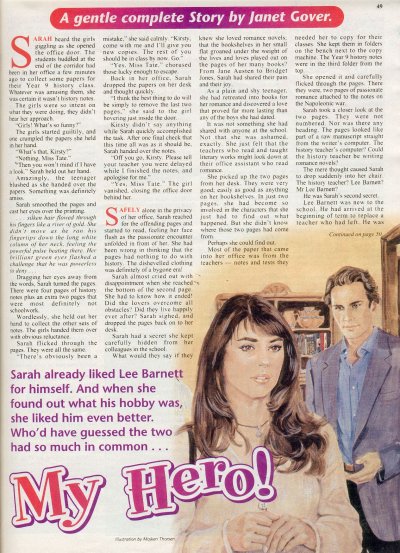 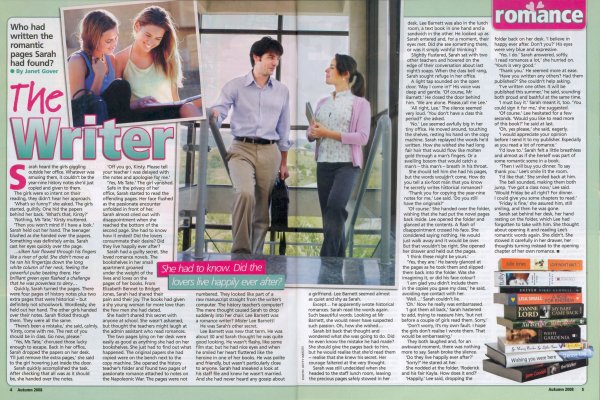