Faded window shutters hung at sad angles. Cracks scarred the faded paint. Dust coated the floors. Once upon a time, it had been a marvellous thing, crafted with care and pride and love, but now the doll’s house was old and shabby.

“This won’t bring much,” the trader thought, setting it on the ground. Even for a car boot sale, it was pretty tatty. Still, a couple of pounds was better than nothing. As with all the leftover rubbish from his antiques shop, he’d take whatever he could get.

A long line of cars and vans filed past, covering the doll’s house with a new layer of dust.

Ken pulled into his usual spot. He opened the back of his old estate car, propping the tailgate open with a piece of rough timber carefully chosen for just that function. With the ease of much practice, his smiling wife unfolded the wooden table. Humming softly, the man reached for a box of vegetables.

The young couple barely made it. The efficient woman with the floppy perm pulled the gate shut behind them, declaring, “No more room for sellers. Sorry Folks. Maybe next week.”

They parked under the large oak tree, next to Ken and the strange assortment of old lawnmowers he was now unloading from the back of his car. He smiled at the little girl and nodded to her parents, as they too began unpacking the goods they’d brought for sale.

The first customers were traders. Before the gates opened to the public, the ‘professionals’ toured the site, paying a few pennies for things they’d later sell at a profit.

The young couple looked uncomfortable as the traders picked over their wares. They exchanged embarrassed glances as they turned down the pitiful offers.

“Good for you,” Ken thought. “The real punters are just arriving. Hang on, and you’ll do better.”

The smell of frying bacon wafted across the car boot site. Ken sniffed deeply and turned to find his wife was way ahead of him, waving as she set off in search of breakfast.

He heard a giggle, and saw the little dark-haired girl watching. He winked broadly at her, as he pocketed the takings from his first sale. At 30p each, the vegetables wouldn’t bring a fortune. But the growers, retired friends of his, appreciated the few extra pounds.

The bargain seekers were already out in force.

“Shall we start here?” a teenage girl asked her Mum.

“OK.” One turned left, the other right, and in seconds they had lost each other.

“Remember, just what we came for, nothing else” a man admonished his wife, as she looked the line of stalls, her eyes alight with shopping frenzy.

A smiling child ran past clutching a giant green blow-up alien. The sale was underway.

“It’s too much.” At the next stall, the woman’s voice was overly loud. “I’ll pay one pound.”

“Sorry, but I’d like three.” The young mother’s voice was marked with something approaching desperation.

With a derisive snort, the customer moved off. The younger woman looked upset, as she repositioned the small glass statue in her display.

She smiled back. “I’m new to this – but I suppose you’ve already guessed that.”

“You get all sorts here. After a while, you’ll recognise them.”

“What do you mean?” Her husband joined the conversation.

“Well, there’s some shop here because they can’t afford new things. The rich ones usually want to get something for next to nothing. They’re tough. You need to be tougher.”

“But most,” Ken hastened to reassure them, “are just here for a fun day out, and maybe to find something interesting. They’re what makes this such a treat.”

Both parents turned quickly to look. Their daughter was nearby, gazing at the old doll’s house.

“Emma,” her mother went to her. “Remember, you promised not to wander off. If you are really, really good, you can have an ice-cream at the end of the day.”

“Yes, Mummy.” But the little girl’s eyes stayed fixed on the dolls house even after she took her seat beside her mother.

By early afternoon, the sale was over. Ken’s produce was all sold. So too was a lawnmower. The young couple re-packed their unsold goods.

Emma watched the trader reclaim the doll’s house. He stowed it in his van alongside the unsold wooden picture frames and boxes of china and glass.

The family waved a friendly goodbye to Ken, then left via the ice cream truck.

The young couple arrived earlier the next week, and were directed to a site across the path from Ken. They waved a greeting, which he returned.

“The secret,” Ken confided to his new friends over a midmorning cup of his wife’s tea, “is to have something that no-one else has. For me, it’s the produce. Brings people in. Then I can convince them they really want a lawnmower. You need something unique to make a go of this.”

“Oh, we’re not doing this forever,” the young woman said. “We’re just trying to get rid of some things. We don’t have a lot of money, and well… it seemed wicked to just throw it away.”

The older man understood. He had noticed the age of their car, and the lines of worry on the young man’s face. “Where’s Emma?”

“Over there,” her mother sighed. “She’s been pestering us about that thing all week.”

The little girl was staring at the old doll’s house, her face shining as her mind pushed past the dust and the stains, and saw what lay beneath.

Only the arrival of a customer with a particularly friendly three-legged dog distracted her.

“What happened to him? Does it hurt? How does he chase rabbits?” The mysteries of life on three legs consumed Emma while her mother sold some books to the dog’s master.

When she looked back, the doll’s house was gone!

The sky darkened and huge raindrops pelted down. Sellers rushed to cover their wares. A youth hurried past, protecting a battered electric guitar under his coat.

Emma retired to her parents’ car. When the sun re-emerged a few minutes later, she didn’t. Ken waved as the car pulled away at the close of trading. The child waved back, but didn’t smile.

A man and his son walked past, carefully toting an aged wooden school desk, stained by ink and scarred by generations of puppy love.

“What is it this week? More tomatoes? Cabbages?” Emma’s mother greeted the Ken with a happy smile.

“Leeks, and for a special few… ” He produced an apple, polished it on his shirt, and presented it with a flourish to the dark-haired girl.

“This is our last time,” Emma’s mother was eager to share good news. “We’re moving.” Her voice suggested this was a far better future than she had dared hope.

“Thing’s haven’t been too good lately,” she confided. “My husband was laid off, and work’s hard to find. Now his brother’s found him a job, up north. A house too, at least till we find our own place.”

The day passed faster then most. Ken was busy. Buyers wanted both leeks and lawnmowers. There’d be an extra pint at the end of this sale.

Before breaking camp, he glanced across the way. The car was already packed. The mother was waiting.

“Did you sell everything?”

“Just about. My husband is taking the last bits to the traders. We’ve got some money to help us move. And it’s been fun.”

“I have something … give me a minute.” He ducked back to his car, and returned with a box. “I just wanted to check this was OK, before I showed her…”

Too late. A few yards ahead of her returning father, Emma had already seen the contents of the battered cardboard box. Smiling ruefully, the Ken lifted out the doll’s house.

The walls gleamed crisp white, and the new window shutters were blue. The front door was also blue, with a tiny brass knob. Red velvet curtains hung in the windows.

Eyes shining, Emma moved around the back. “Can I?”

The little girl opened the back of the house. Each room was freshly painted in bright yellows and pinks and greens. There was carpet and a table and chairs, and beds on the upper floors.

“It’s so beautiful.” Emma’s voice was soft with awe.

“All it needs now is some dolls to live in it.” Ken cast a questioning eye at the parents before kneeling down beside the daughter. “Have you got any dolls Emma?”

“Then, why don’t you take this home with you, for your dolls.”

Emma’s face lit with joy. She looked at her Mother. “Can I Mummy?”

The young woman nodded, her eyes bright. As Ken stood up, she planted a kiss on his cheek.

“This is really too much,” her husband said. “I should…”

Ken waved away the younger man’s offer. “I like to fix things. My wife likes to sew.” He held out his hand. “Good luck in your new home.”

Emma’s eyes didn’t leave her new treasure, as her father loaded first the doll’s house, then the child safely into the car. She was still gazing at it as their car disappeared.

Smiling, Ken returned to his wife and car.

“I’ll see you next week,” he called to the gatekeeper, as he drove away. 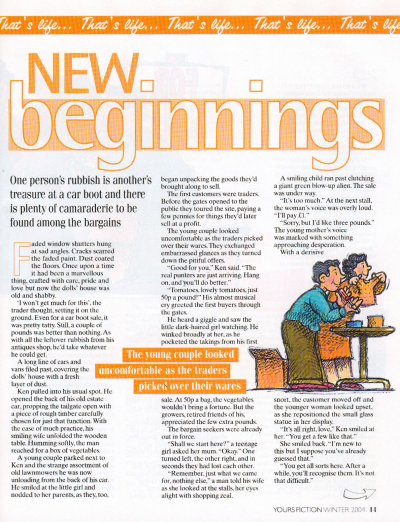 I’d never seen anything like a car boot sale until I came to England. What fun they are! The last time we moved house, rather than throw away stuff we didn’t want – we set up a table at a car boot. We made more than enough money to buy a very nice pub lunch on the way home.