I enjoy working weeknights. The pub’s quiet and I’ve got time to chat. The weeknight regulars aren’t big drinkers. They’re here for the company as much as the beer. There’s usually a guest or two. A long way from home, they don’t mind some company.

This particular night, old Mr and Mrs Fahey were chatting about someone’s wedding anniversary. He always has a half of bitter. She’s a G&T. There’s not much a person could tell them about wedding anniversaries. They’ve had 51. Proud of it they are, and rightly so.

By the fire, with his malt whisky, one ice cube, was Mr Cartwright. He’s with some big London law firm. They’ve got clients here. Old money. There’s not much new money around these parts. Not likely to be either, the way things are going.

The couple drinking wine at the end table were guests. No sign of a wedding ring, and she looked older than him. Still, I’m not one to judge.

Some of the local lads were in. They’re not often here on a weekday. Most of them work on the industrial estate. On the production lines. It’s dirty and boring and doesn’t pay much, but its work, and a lot don’t even have that. On Friday nights, they let off steam. They get a bit drunk, and a bit noisy. Sometimes they give the younger barmaids a spot of cheek. Not me. I’m a few years too old, and a few pounds too heavy for them to waste time on me. Still, they’re not bad, just a bit full of themselves.

They were playing pool, but stopped when she walked in. We’re a small town, and we don’t often see the likes of her in the pub. She was tall and slender, with long dark hair. Her eyes were dark too. Exotic looking, she was, and classy. I read those magazines. I know quality when I see it. It was more than just her designer clothes. It was the way she held her head. The way she walked. Her voice. She was everything I dream of being.

The lads watched her walk to the bar. She must have noticed, but she ignored them.

I was ready to dislike her. For her looks, her clothes … her whole life, really. I do that sometimes, if I feel someone is looking down on me, thinking they’re better then me. Mostly they’re not, it’s just that sometimes I don’t feel too good about myself.

“Thanks.” Her smile was genuine.

She looked around, barely glancing at the lads. They were back at their game, a little louder than before. Posing a bit more too. But she wasn’t interested. She settled at a quiet table and took out some papers. Here on business, I thought. She’ll have her drink, maybe two, then head upstairs.

“Coming up.” As I filled the glasses, the game ended. I looked to see who’d won. Not Jamie. He was looking at her.

You’ll not get much joy there, I thought.

Jamie delivered the beer, but was back at the bar when she came for her second. She glanced at the pool table.

I decided to tell her. She’d find out soon enough. “It’s a competition,” I said. The winner gets the girl – any girl in the bar.”

She smiled, and glanced at Jamie, who was listening to every word. “What happens if the girl wins?”

Even Jamie smiled. It was a good joke.

He went back to the table and challenged. This would be the last game.

She left paperwork then, and sat at the bar, as cool and elegant as you like. Jamie knew she was watching, and strutted his stuff. He’s a good player, and not bad looking. Trouble is, he knows it.

He won of course. As his mates cheered, he looked at her. By his rules, it was time to collect his winnings. She stood up, and walked towards the table, as the lads chuckled and nudged Jamie.

“Jamie. They tell me,” she tossed her dark hair, “that the winner takes the girl home.”

“That’s right.” If he’d puffed his chest out any more, Jamie would have exploded.

“First, you have to defeat all challengers?”

“No, you haven’t.” She took a cue and tested the tip with one long, red nail.

Jamie wasn’t so sure of himself now. “Around here, girls don’t play,” he blustered.

“This one does.” She dropped a coin into the slot and bent to pull the lever. The balls clattered out. She looked back over her shoulder “Are we on?”

Jamie didn’t have a choice. “You’re on.” The lads cheered. “Do you want a drink?”

She nodded. I poured another cider. This one was on the house.

Jamie broke and one ball clattered home. With his next shot, another dropped into the middle pocket. Cheered on by his mates, Jamie was flying. I knew what would happen next. I’d seen it before. Sure enough, he took the shot too casual, and missed by several inches. Jamie shrugged. It didn’t matter. After all, he was playing a girl.

The lads stood back. They weren’t being polite. They just wanted to get a better look as she bent over the table in those jeans. She knew. The sway of her hips was deliberate. As she spread her fingers on the cloth, it looked like she knew what she was doing.

I silently cheered her on.

Her cue smacked the white ball. It shot across the table, tapped her target which rolled… and stopped well short of the pocket. There was an explosion of muffled male laughter.

Jamie sank another ball, but missed his second shot.

The lads were more interested in her bum, than her second shot, which also missed. As Jamie took his next, she caught my eye. Something in her smile gave me confidence.

Jamie put one more away. Four down – three to go. She still had seven on the table.

Now, I thought. If you’ve been playing with him, it’s time to make your move. She didn’t choose an easy shot. The double into the middle pocket missed. The lads stopped laughing when the ball rolled across the table a third time to drop into the top pocket. It had to be good luck, more than good play. They seemed reassured when her next shot seemed wild.

Jamie dropped two more. One to go and he’d be on the black.

She put another down. Five to go. When she missed the next shot, I studied the table carefully. Suddenly, it was clear. Jamie’s last ball was against the cushion. And he was snookered. Her balls were over the pockets. She was on from everywhere.

Jamie checked the angles. Took a deep breath. Took the shot. The white bounced off the cushion, crossed behind the black and tapped a ball. The wrong ball. Two shots for a foul.

I didn’t think she would.

A smart tap. One in the top pocket. Another click, and a second ball dropped. Jamie started to look worried when the third vanished. With very little effort, she cleared the table. When she was on the black, she smiled at Jamie. It was anyone’s game now.

It was a tough shot, and Jamie’s ball was in the way. When she leaned over the table this time, the lads were watching the shot. The cue ball gently tapped the black. The line was perfect, but the eight clipped Jamie’s ball, and veered off course.

It was do or die and Jamie took his time. His last ball dropped home…and he was on the black too.

There’s a TV in the pub. The crowd watches the footy or whatever. But it never gets really tense. The Cup final. The Formula One championship. And Jamie’s game with the girl.

Her back was to me, so I didn’t see the look she gave him before his shot. But I did see the way he smiled back.

He took aim, then he looked at her again. That smile was still on his face. The cue ball crossed the table and clipped the black, which rolled towards the top pocket. The lads cheered as it dropped home.

In silence they watched the white ball roll on and drop into the middle pocket. In off the black. Forfeit.

She walked around the table. “My game.” The words were soft, but loud enough in the quiet bar.

“Yeah. Well… I …” She ignored the stammered words, and looked Jamie slowly up and down. I recognised the look. So did Jamie. He’d used it often enough when he was wearing the winner’s shoes. He didn’t like being on the receiving end.

“Winner’s prerogative?” She shook her head. “Thanks for the game. Goodnight.”

She collected her things, and walked out.

Jamie and his mates still play pool. There’s not much else to do. The winner still takes the girl home. Most of the time, anyway. The girls seem happy enough to go along. I’m still pulling pints, and wishing for a better life. If Jamie gets too cocky, I catch his eye, and we both remember. He settles down then.

The girl never came back. I still don’t know why she came that first time. Maybe it was business. Whatever it was, she gave a gift to an ageing and overweight barmaid, and taught a cheeky lad a lesson in playing the game. 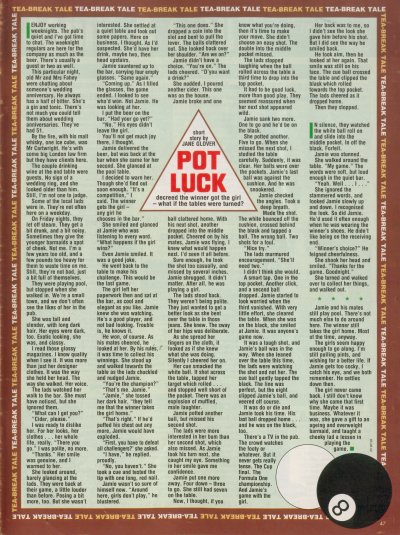 Published as “Pot Luck” by My Weekly Magazine – July 2003

As a young television journalist, I covered a story about the closure of an exclusive men’s club. Women were allowed as guests – but only in the dining room. As part of the report, I was filmed taking a shot on the billiard table, much to the horror of a passing club member. The club was demolished a few days later and I think it’s likely I am the only woman to have ever played on that table.