“Mum, a spaceship has crashed in the allotments.”

Jenny looked up from the litter of bills and bank statements on the table. Eight year old Ben was standing in the doorway quivering with excitement.

“I saw a spaceship crash in the allotments.”

Jenny ran her hands over her face, forced her attention away from the papers on the table and smiled at her son.

“A spaceship?” she said. “Well, that’s exciting. Where is it from?”

“And is ET on board?” The film was a favourite.

Jenny hesitated. Ben loved playing in the allotments behind their council house, but she didn’t like him going there alone.

“Mr Laker is there,” Ben said anticipating her.

Jenny nodded slowly. The retired teacher who grew vegetables by the railway line was an old friend.

“All right,” she said. “Be home by five o’clock.” The last words were lost in the banging of the door.

Jenny sighed and turned back to her struggle with the bills. As an army wife, she was used to coping on her own when Steve was away. But this time it was harder. This time he was in real danger in that far away place. Jenny forced down the dull ache of fear that she had felt every day since her husband’s unit was posted to Iraq. She turned her attention back to the papers in front of her. Steve relied on her to look after things, and she wasn’t about to let him down.

She was just about done when her son returned.

“Mum, can I have a needle and some cotton?”

“They’re Clangers, and one of them is hurt!”

Now he had her attention.

“Clangers?” Both she and Steve had grown up watching the knitted pink creatures on television. Just before he was deployed, Steve had bought the DVD for Ben. It must be almost worn out now from the number of times it had been played. Jenny wondered if Ben really liked the rather simple TV show – or if the hours spent watching it were more about missing his father. Whatever the reason, he knew the stories by heart and could whistle like a Clanger too.

“In the spaceship,” her son explained. “One of them was hurt when the ship crashed. I want to help him.”

Jenny nodded, a serious look on here face. “That’s very kind of you Ben. All right, let me see what I can find.”

Jenny opened the door to the under-stairs cupboard. An old shoe box contained a wide assortment of sewing implements.

“Let’s see.” She found and some thick black cotton. “Will this do?”

“Of course it does. Sorry.” Jenny found some wool of the correct colour and her son rushed off.

Jenny made herself finish dealing with the bills before she switched on the computer to check her e-mail. She still found it strange that soldiers were able to e-mail their families even in the middle of a war, but the regular contact had helped her cope during the long lonely months. Today, for the second day in a row, her mail box was empty. Jenny was disappointed, but not worried. Some days Steve just wasn’t able to e-mail. Her eyes flickered to the television with its 24 hour news channels. Tempted as she was, Jenny turned her back on the set and returned to the kitchen. She tried to avoid the news when Ben was around.

He was back by five o’clock as promised.

“How is the injured Clanger?” Jenny asked, setting a pot on the hob for the vegetables.

Ben replied with his best Clanger whistle. Jenny thought she could almost hear words in the notes.

“I’m glad he’s feeling better,” she said. “Now, wash your hands and come back down. You can help me get dinner ready.”

The next morning was Sunday and Jenny slept late. As she dressed, she heard faint whistles floating up the stairs. Ben must have that DVD on again. When she headed for the kitchen a few minutes later, she was surprised to find Ben near the back door, and the television switched off.

“Good morning,” Jenny kissed his tousled brown hair. “You were up early. You must be hungry. I’ll get you some breakfast.”

“I’m not hungry, Mum,” Ben said. “The Clangers brought me some blue string pudding for breakfast. It was really nice.”

The milk vanished pretty fast. Jenny surmised that imaginary breakfasts might taste good, but they weren’t too filling. She handed Ben a piece of her own toast.

“Mum, I need some tools and stuff,” Ben said between bites.

“To help the Clangers fix their spaceship.”

“What is a Clanger space ship made of?”

“All right then. What do you need?”

“Can I have some of that foil you use for cooking?”

“I suppose so. How much foil does it take to fix a space ship?”

As well a length of foil, it seemed spaceship repairs required a rusty old screwdriver that Steve had been planning to throw away, a ball of string and two chocolate biscuits.

“There you go,” Jenny said,” Good luck with the repairs. But stay in the garden. I don’t want you going down to the allotments this morning.”

Before starting her own day’s work, Jenny checked her e-mail. There was still no word from Steve. She bit back a ripple of fear, and turned her attention to housework. While she was making her bed, she glanced out the window into the back garden. Ben was happily playing near the shed. She caught a glimpse of something pink at his side. Steve had given his son a Clanger toy to go with the DVD. Ben must have it with him in the garden.

The day passed slowly as Jenny tried to avoid going back to her e-mail. She took Ben to Tescos and they did the shopping. While she was hanging out some laundry, she waved to Mr Laker in the allotments, and allowed Ben to join him for a while. But all the time, her mind was with her husband so far away, hoping that next time she turned on her computer, there might be some word.

When she called Ben for dinner, he came in proudly clutching a new toy.

The boat was made from kitchen foil. The mast looked remarkably like an old screwdriver, holding up a piece of broken plant pot decorated with musical notes drawn in marker pen.

“It was a present from the Clangers,” Ben told her. “Because I helped them fix their space ship. They are going home tonight.”

Home! Jenny felt a tight twist of her heart as her thoughts flew to Steve so far away.

Ben spent the evening staring out the window hoping to see the Clangers take off, but sleep finally caught up with him. With her son safely tucked up in bed, Jenny turned on the computer once again.

Steve’s e-mail was at the top of her inbox. Jenny closed her eyes for a few seconds, as relief washed through her. Then she opened the mail.

The words leaped of the screen. His unit had been given their orders. Within a couple of days, Steve would be back with her and Ben!

Jenny didn’t try to hold back the tears that ran down her face as she typed her reply.

After sending her love to her husband, Jenny walked up to her son’s room. Ben was asleep. The curtains were open, and the moonlight shone on the toy clanger and the music boat sitting on his bedside table. Jenny smiled at the music boat. It was cleverly done. She must remember to thank Mr Laker for helping Ben make it. Jenny walked to the window to close the curtains. She paused for a few seconds, looking out at the clear spring sky. Soon Steve would be flying home to her and their son.

Behind the house, near the allotments, a sudden flash of light caught her eye. The light moved swiftly up and away and vanished. Jenny’s brow creased. It could have been a light from a passing train, but she hadn’t heard any noise. He face cleared. It didn’t matter. Nothing mattered, except that Steve was coming home.

Her heart was singing with joy, and for the briefest moment, Jenny thought she could hear the music. 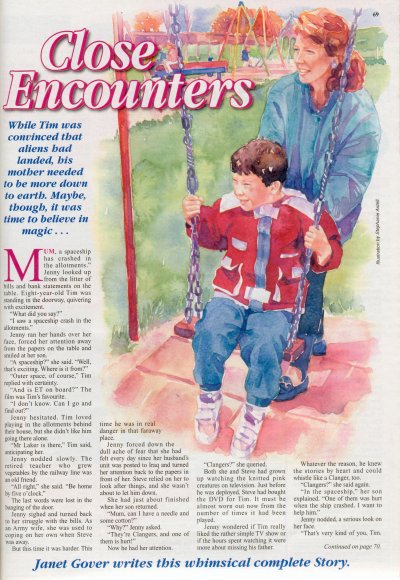 I never met a Clanger as a child. The TV show didn’t make it as far as Australia. My first experience with Clangers was in a bookshop, when my husband (webmaster John) suddenly snapped to attention. “That’s Oliver Postgate”, he said in awed tones looking at an elderly gentlemen signing stuff at a desk. To end my appalling ignorance, he (John that is, not Oliver Postgate) immediately bought the complete Clangers on DVD. What can I say – they are just amazing! Their simple stories had such wonderful messages… that are still important today.
This is my salute to the Clangers.