They were sitting side by side, staring out of the window when it began.

Lani gave a little cry, and her fingers tightened convulsively around the nurse’s hand.

“Is this it?” she asked, holding her distended stomach with her other hand.

Lani’s voice shook. “I’m scared.” It showed in every line of her face.

The older woman patted the girl’s hand. “Don’t be frightened. Women have been doing this for thousands of years.”

Fay followed the girl’s gaze back to the window and the empty plateau outside. A million stars looked down on the barren landscape from the ink black sky.

They sat in silence then, as if trying to hold on to their last few moments of peace.

At Lani’s next contraction, Fay stood up and reached for the intercom.

The two orderlies were dressed in white coats. They looked almost as nervous as the mother to be. The wheelchair was so new it gleamed.

“I don’t want to go!” the girl’s voice was quiet but firm.

“It’s a bit late now to change your mind,” Fay whispered in her ear.

Lani almost smiled. “I don’t want to change my mind. I’m just not leaving this room.” Her eyes didn’t leave the window. “It has to happen here. For both of us.”

Fay understood. She signalled the orderlies to leave. They did, with obvious reluctance and Fay caught a flash of something very like anger in the eyes of one. It made her instantly suspicious. For the past few months, she had spent much of her time protecting her patient from the media and from crooks and cranks who were tying to use this important event for their own purposes.

The Doctor arrived a few minutes later. He was immaculately groomed. His surgical gown looked as if it had been tailor made for the occasion. Fay thought that it probably had. The Doctor was famous for more than just his outstanding medical skill. He liked publicity and this birth was going to make headlines.

“Lani, you’re doing just fine,” he spoke in careful soothing tones. “It’s time to take you down to the theatre now.”

“We talked about this,” the Doctor chastised gently. “This is a mining operation. No-one ever expected us to need a maternity unit. We didn’t have enough time to ship in all the things we might need.”

Lani had kept her pregnancy a secret well into her fifth month. By the time she finally went to a doctor, it was loo late to send her home to have her baby. Dangerous as it was for her to carry the child in this frontier settlement, the journey home would have carried even more risk.

“The theatre is equipped for any kind of emergency,” the doctor argued. “If there are any… complications, you’ll be better off there.”

“You said everything was all right. Normal!” Fear made Lani’s voice shrill.

“And it is,” he hastened to reassure her. “I’m certain everything is fine. But, if it isn’t…”

“No.” Lani turned to the nurse. “Fay, you understand, don’t you? I want to stay here. Near the window.”

Slowly the sliver of silver crept another inch into the sky, and began to show form and colour.

“If she wants to stay – she stays,” Fay told the indignant doctor.

He was tempted to argue. Fay could see it in his eyes. But he didn’t. He knew when he was beaten. An argument might find its way into the press. Even worse, it would upset his patient at the time she needed calm above all else.

“All right,” he said. “But you must let me bring some extra equipment into the room.”

Lani agreed to that, but his next suggestion did not please her at all.

“No,” she said flatly. “I do not want any drugs. This must be natural.”

The doctor could have told her that nothing about this birth was going to be natural. It was about as un-natural as any birth had ever been. But by now, he knew he was beaten. The girl had made up her mind and nothing he could say would change it. He would have the drugs nearby, if she decided the pain was too much. The entire medical facility was on standby. He had done everything to prepare for the very real possibility of something going wrong. There was nothing else he could do but wait. And pray.

Lani’s child entered the world with a minimum of fuss. It seemed but an instant between the mother’s first cry of real pain, and the child’s cry as it sucked air for the first time into tiny lungs.

Fay’s eyes were wet with tears as she wrapped the perfect little girl in a blanket. Dark curls framed a soft face and two huge dark eyes. “She’s beautiful,” Fay said as she handed the child to her mother.

“I was going to call her Eve,” Lani whispered so softly that only Fay could hear. “But Eve belongs to another place and time.”

“Did you know I was born on an island?” Lani could almost have been talking to herself.

“Yes. A tiny island, in the middle of the Pacific Ocean. That’s where my ancestors lived. They were great travellers. They explored half the world in tiny boats. My full name is Lulani. In the language of my ancestors, it means the highest point in the heavens.” Her voice trailed into silence, and Fay thought she had fallen asleep.

“Tala,” Lani’s sleepy voice said. “She was their moon goddess. I will call her Tala.”

Fay sat by window as her patient slept. Lani had declined the doctor’s suggestion of a sleeping pill, and drifted naturally into sleep after the easiest birth that Fay had seen in more than thirty years of nursing. Was that the gift of this place, Fay wondered? Would all the women who followed Lani receive the same blessing?

She held baby Tala in her arms, listening to the tiny sounds the babe made as she began touching the world around her with tiny clenched fists. They were sounds Fay hadn’t heard since she left her home five years before. They were sounds never before heard in this place.

The blue and white globe hung in the inky sky. Through the thin cloud layer, Fay could make out the shape of the continents. At least, she thought she could. The planet’s reflected light shone through the window and onto the crib, and onto the sleeping babe who would be the first human not to call Earth her home. 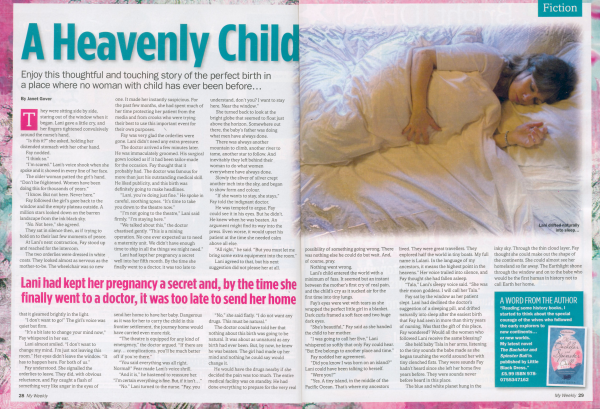 Published as ‘A Heavenly Child’ by My Weekly – March 2010

Reading some history books, I started to think about the special courage of the wives who followed the early explorers to new continents… or new worlds.