Today is the best day of a writer’s calendar… it’s publication day for a new book.

The book is The Heights – a book I’ve been wanting to write for a very long time. It’s an adaptation of Wuthering Heights, which is one of my all-time favourite books.

Wuthering Heights is one of those books that people tend to either love or hate. It’s dark and disturbing and the characters tend to also be dark and not particularly likeable. Many, many people die in Wuthering Heights and it doesn’t exactly have a happy ending. While it’s often referred to as romantic novel, I don’t think it is. It’s a look at the darker side of relationships, and for me is totally compelling. I’ve read it many times, and no matter how familiar the story is, it always captivates me. 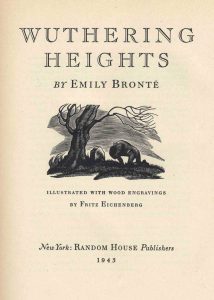 Wuthering Heights is also one of those books that everybody ‘knows’. Even people who have never read it know it’s about the relationship between Heathcliff and Cathy, and a lot of people have seen film and TV adaptations that focus on that relationship, quite often painting it as love, when I think it’s really a dark obsession that destroys everyone it touches. That’s what I always wanted to draw out – the tragedy in the novel. But I hesitated to try and that’s where Juliet Bell comes in.

I wanted to set this exploration of the story in the same place as the original and I wanted to set the story of isolation and alienation and obsession against the turmoil of the Thatcher years and the miners’ strike. Being Australian, I didn’t think any amount of research could give me the right voice for Yorkshire and that time of great social upheaval. But a casual conversation at a writer’s conference led to a more serious lunchtime conversation and a collaboration with Alison May. Alison is a friend, a fine writer and a northerner. She also loves Wuthering Heights and is interested in heroes who are not that heroic.

It took several months, a lot of lunches and some cloud storage but The Heights was born. We’re both very proud of the book and there is another Juliet Bell novel already underway.

We chose Bell for our collaborative name as a tribute to Emily Brontë, of course.

The searchers took several hours to find the body, even though they knew roughly where to look. The whole hillside had collapsed, and there was water running off the moors and over the slick black rubble. The boy, they knew, was beyond their help. This was a recovery, not a rescue.

A grim discovery brings DCI Lockwood to Gimmerton’s Heights Estate – a bleak patch of Yorkshire he thought he’d left behind for good. There, he must do the unthinkable, and ask questions about the notorious Earnshaw family.

Decades may have passed since Maggie closed the pits and the Earnshaws ran riot – but old wounds remain raw. And, against his better judgement, DCI Lockwood is soon drawn into a story of an untameable boy, terrible rage, and two families ripped apart.

A story of passion, obsession, and dark acts of revenge. And of beautiful Cathy Earnshaw – who now lies buried under cold white marble in the shadow of the moors.

Today the book goes out into the world – and I’m sitting here hoping the world will think we’ve done the original justice.